The Chargers were coming off an uninspiring loss from the first week of MFL, but they put all doubts away in this game as Hani Mamdani showed that he has still got it with an efficient 25/35 with 5 TDs. Shoaib Mamdani had a productive game with 7 receptions and 2 TDs, and Danial Ali continues his tear as one of the premier players in the league with 7 receptions, 2 TDs, 7 Flag-grabs and 1 INT. Danial has improved his flag-grabs every year in the league since we have tracked the stat, and he was well on his way to career highs in receptions and TDs until he had to switch over as the full-time QB for the Panthers last year. The Chargers will go as far as Danial Ali will take them this year.

The Steelers have one of the best teams in the league, talent-wise. However, it may take them a little while to put it all together. They were missing Khaleel Kassam and Omar Khamissa had to gut it out this week, so we can give them a break defensively. However, there should be no excuse why the Steelers offense should be sputtering. With two of the best route runners in the league in Ammar Dayani and Mujtaba Abidi, and having reliable throughout the roster, the Steelers have to be better. A lot of the responsibility lies at the hands of Taleb Zaidi, who is just trying to get in a rhythm after a long offseason. We’d give them until Week 5, if things don’t turn around, Ahsan Raza may look to shake things up. One thing we can say is, the Steelers don’t lack confidence. They face Jaguars next week, and Mujtaba Abidi has promised 8 TDs (all by himself next week) – but we’re hearing rumors that he won’t be there to see it through. So captain Ahsan Raza and the gang will have to pick up the slack.

Prediction Alert – With the Lions facing a short-handed Patriots, we expect them to get their first victory by a final score of 35-28.

The Lions and Jaguars faced off in what turned out to be the most exciting game of the week. The Lions were glad to have Noor Zia in their lineup for this game, as it gave them their full-time QB. Noor Zia has the strongest arm in the league, and on one of the drives, the average throw distance was two pylons from the other end-zone. His height is yet another distinct advantage, especially in short yardage situation, where he can see over the defense. With that said, his efficiency numbers need to improve as he was 21 for 37 with 4TDs in his MFL debut. The Lions have played their opponents very tough in the first 2 weeks, but have yet to get on the win column. Last week, it was a story about missed opportunities, and they lost by 1 TD. This week, they tied the Jaguars, in a game they probably should have won. They will face the Patriots in their next matchup, who will be fielding a team missing 4 of their starters.

The Jaguars should feel lucky to have tied this game, and they have their defense to thank for it. Said Samater had a rough game going 15/30 w/ 4 TDs and 1 INT. However, Shabbir Rizvi continues to terrorize all offensive players within a 10-yard radius of him. If you’re around him, and have the ball, you can guarantee he’ll get your flag. He also had a strong game offensively with 6 receptions and 2 TDs. He will have to show up more consistently on offense for the Jaguars to compete. Speaking of showing up, or lack thereof, we’re trying to understand how Muzzamil Rizvi notched an 0-fer on the stat-line (0 receptions, flag grabs or ints). Jason Collins & Tony Snell would be proud. And though it may not show up on his stat-line, Ahmed Al-Waili had a very strong game defensively, and also had a receiving TD.

Prediction Alert – We predict that the Jaguars will get their first win this upcoming week against the Steelers – winning a tight game with a final score of 35-28.

This was supposed to be our game of the week, and it sure delivered that in the early going. Both teams played great defense, and the Patriots missed out on some early opportunities in the red zone. By our count, they had 5 red zone opportunities and were not able to deliver in this game, and that very well could have been the difference. Kumail Meghani seems to be struggling with red-zone efficiency averaging only 3.5 TDs per game in the early going after averaging 6.3, 4.2, 5.3 in his last 3 seasons. While drops have been a concern for the Patriots, you may have to wonder that after years of throwing, have Kumail’s past shoulder issues have resurfaced? On the positive side, Noman Laasi had a great overall game for the Patriots getting his first 2 TDs, and his second pick of the season.

The Colts, for a second straight week, seemed dominant. Baby Rook (Kazim Raza) had the catch of the week, Moss-ing Kumail Meghani for a long TD; he had 6 receptions and 2TDs and the early lead in the ROY voting. Hisham Ali had 4 reception and 2 TDs. He was also a nuisance on defense rushing the QB, and adding an INT to his stat-line. Alykhan Gangani was the other standout in this game with 7 flag-grabs. This game, Ali Haroon wasn’t at his best and yet still put 35 points. The Colts also had their first swearing penalty of the season, which serves as a reminder for all player – as it cost them a red zone opportunity and turned the ball over. The Colts will face the Chargers this upcoming week, and we still don’t believe we’ve seen the best of the Colts.

Prediction Alert – We expect the Colts’ offense and defense to click this upcoming week – we predict a Colts’ victory with a final score of 49-21. 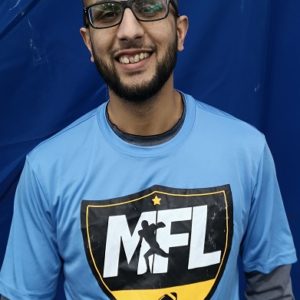